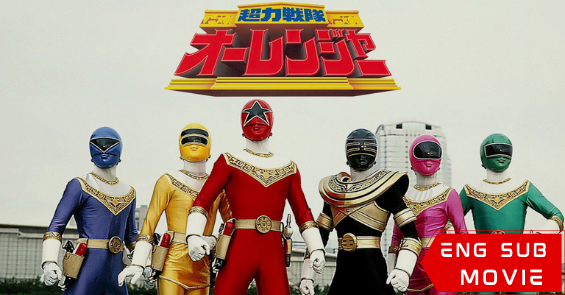 Chouriki Sentai Ohranger: The Movie is a feature film directed by Kobayashi Yoshiaki and written by Shōzō Uehara. It premiered in Japan on April 15, 1995 at Toei Super Hero Fair ’95. It was originally shown as a triple feature alongside Mechanical Violator Hakaider and the feature film version of Juukou B-Fighter

Buldont, Acha and Kocha arrives at Buldont Studios, a movie studio created by Buldont to make a movie.

Some kids are cycling on the streets while Camera Trick, a bird-like Machine Beast spies on them. Suddenly the children all disappeared without a trace. At UAOH, the rangers receive reports of the incident and head out to investigate. On the way, they receive a broadcast from Acha of a movie being filmed by Buldont Studios. The studio is handing out auditions for it, with a 10 million yen reward to all participants. Of course, the reward is a lie, with Camera Trick forcefully adopting various civilians. Goro and Juri witnessed the creature adopting a girl named Misako, and subsequently gave chase. They followed the creature to a car park, where they encounter a man selling balloons. The man then sets himself on fire and explodes, revealing to be a Barlo Soldier in disguise to throw off Camera Trick’s pursuers.

The kids and Misako appear in front of Buldont Studios, where they’re greeted by Locker Knight on horseback. Another robot that’s driving a van coaxes the kids into it, and they follow suit. They are brought onto a movie set, where they marvel and the surreal-looking movie set before them. Acha greets them, introducing himself as the producer. He has the kids put on VR-headsets, where they experience a hyper-realistic virtual world. In the virtual world, Acha hands out cash to all the supposed actors on a steam locomotive. Cat Signal, the conductor of the train announces they are arriving at a town called Senjogahara.

The chief has discovered the location of Buldont Studios, and sends the Ohranger there. The rangers infiltrate the compound, unknowing to them, it was all a part of Buldont’s script. In the virtual world, everyone disembark from the train and gets on a van, where the kid in the yellow jacket notices the train vanishing from reality. The kids are in a van in the real world, where they are moved. The van coincidentally drove past Goro and Juri, who fails to notice the kids inside. At this moment, Kabochumpkin appeared.